The Cave Enhancements mod completely changes the underworld in Minecraft. The assembly includes over 300 new elements, new options for generating caves, biomes, more than 50 types of ore and much more. The underworld is a huge part of the blocky universe, which means that the changes will radically affect the entire gameplay. Try and feel the new changes.

The build is not aimed at making the concept for the 1.17 update, which is also related to the caves.

The author warns that the balance of weapons and monsters may change, since the addon contains more than 200 types of weapons.

New generation of caves
As you can see in the screenshot, the caves will become much larger and larger. Now there will be a lot of new things to explore. A view like the one below will be generated on plains. They all resemble what was introduced in the 1.17 update, so try the new features months before the update itself. 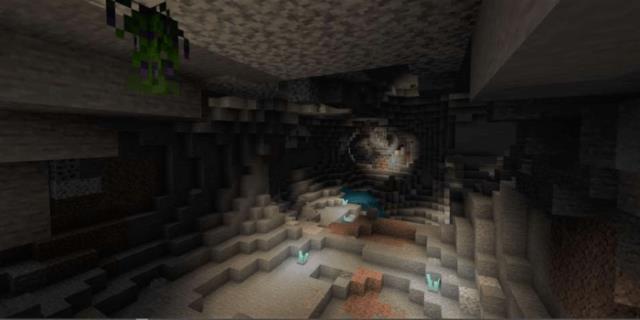 Desert caves
Since the biomes are different from each other, the caves below them should be different too. For example, new blocks called stone sand will spawn in desert caves. Here you can also find the usual types of ore and other blocks.

Ice caves
In taiga or frosty biomes, you can visit ice caves. The terrain is dangerous not only for the terrible cold, but also for ice, which can easily fall through and send you to boil in boiling lava. Also, the location contains slush used for arranging secret roads and passages. In the depths, a blue, slippery rock is generated that you really want to get. 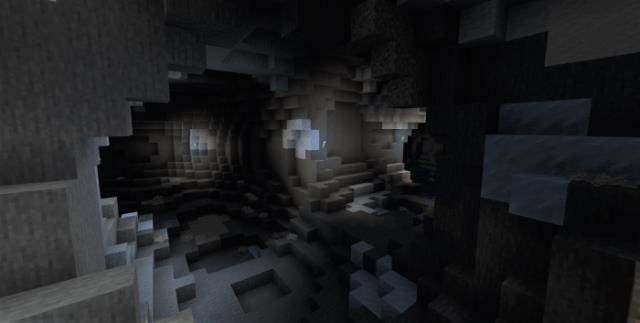 Jungle caves
Improved generation made these caves a little weird and unusual. The area is known for its plants and formations that appear right on the rocks. Be careful - you never know what will happen if you get stuck in the vine. 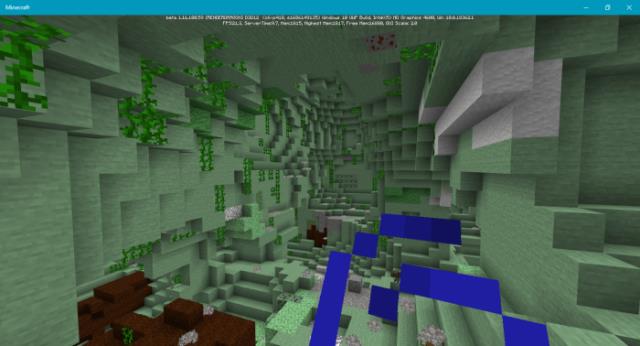 End Caves
And most importantly, the Endermen got their own caves. Measuring the Edge has always been considered boring after killing a dragon, and now you will have something to see and what to explore. If you've always wanted to build a base in the Land, then it's time to do it. A new kind of dungeon
Everyone is tired of the old dungeons - look at something new. There are many types of loot and secrets available. The location contains several types of mobs, including creepers. Try not to die - many explorers have died here in search of treasures. 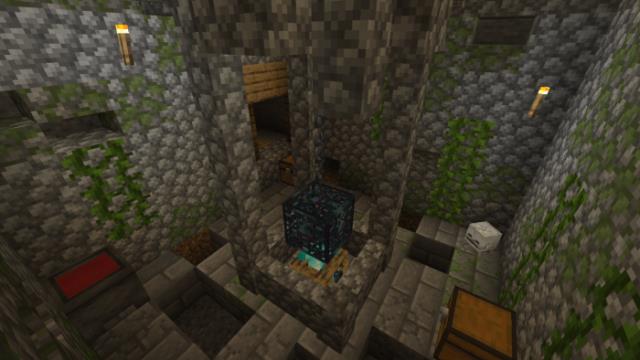 Moss caves
The terrain includes a mini-dungeon, ores, and a miner's hut. The beautiful miner house will attract with its design and explosive beauty. In any case, how do you understand how the hut is arranged.

Crystal caves
And the most valuable and cool find will be crystal caves. Full of crystals and rivers, this location contains dungeons, geysers and even libraries. You can find incredible loot here if you're careful. Terrain generation is very strange.

New types of ore
The add-on includes more than 30 types of ore in the Upper World, 10 in the Lower and 10 in the End. All of them are used for crafting swords or pickaxes. 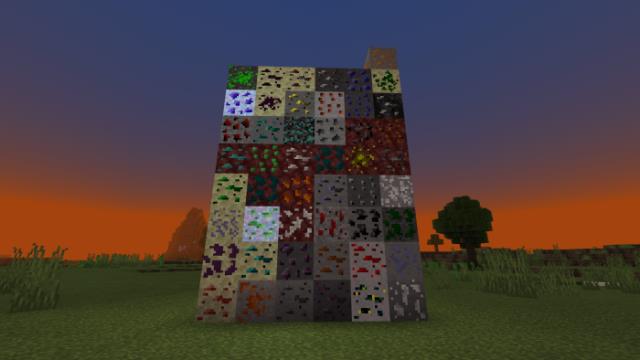 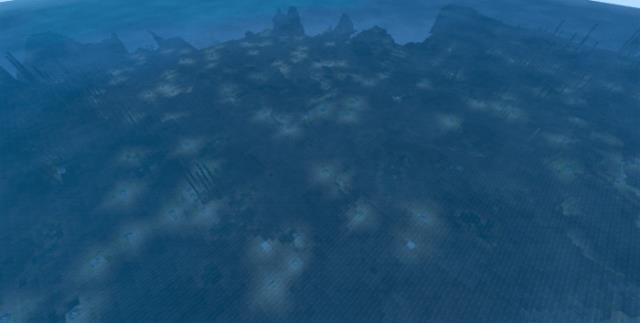 Weapons, tools and armor
All the items shown in the screenshot below are available in Survival Mode, without using the Creative Mode menu. Battle axes, swords, hammers and sickles. All crafting recipes are available in the crafting table. 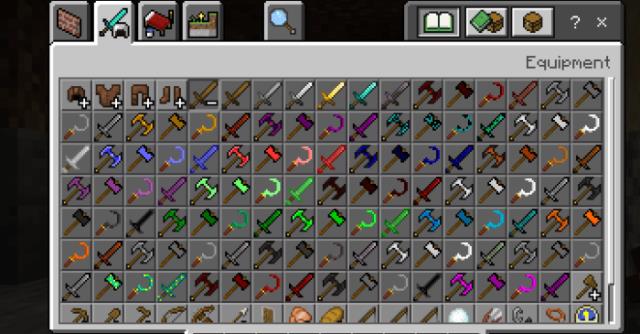 Pickaxes
So far, only 9 types are available. Not all ores support pickaxe crafting. List of available materials: 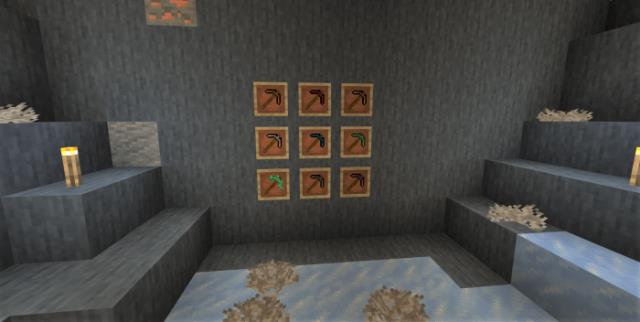 Types of armor
There are even fewer types of armor than pickaxes. Ruby, tanzanite, cobalt, copper and emerald. All types can be crafted in the same way as ordinary armor. Useful things
The screenshot below shows the cave grass and compressor. The cave grass will glow for a few seconds after interaction, illuminating the path for the player. Compressor is a new iron and cobblestone element that compresses a large amount of cobblestones into one block, and also turns granite, diorite and andesite into cobblestone.

Torch lighting when held in hand
If the player picks up a torch, then the entire environment will instantly light up. A useful feature when exploring caves. Roots
Some blocks of earth will have roots. These are useful items that are used to craft seedlings, healing potions, or bone dust. 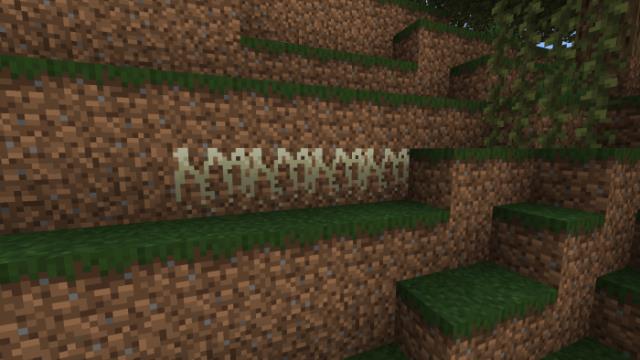 Multicolored crystals
They are randomly generated in caves and light up the darkness.

Vegetation
All new vegetation in the cave includes: Green and Purple Mushrooms, Ender Crystal, Rage Crystal, and Moss. They do not have any function, but they will decorate the deep parts of the caves. It will also generate stalagmite that has not yet been used. 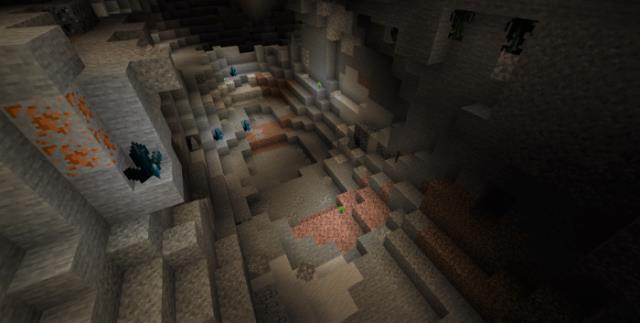 Sword in stone
If you have found such a structure, then you are very lucky. When pulling out the sword, the player will receive a powerful weapon, and if the structure is destroyed, something interesting will happen. Foundry
A new type of workbench, which is used to craft add-on elements: ingots, tools and blocks. Centrifuge
Crafted from compressed stones and nickel ingots. With this equipment, you can turn ordinary dirt or stones into something better. All recipes are in the centrifuge itself. 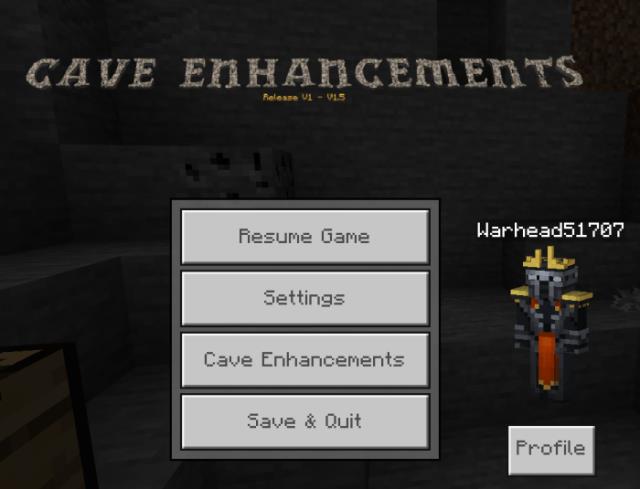 The lightweight add-on option is suitable for weak devices. It does this by reducing generation and caves. Remember that assembly changes the generation functions, so loading the world will take much longer than usual.